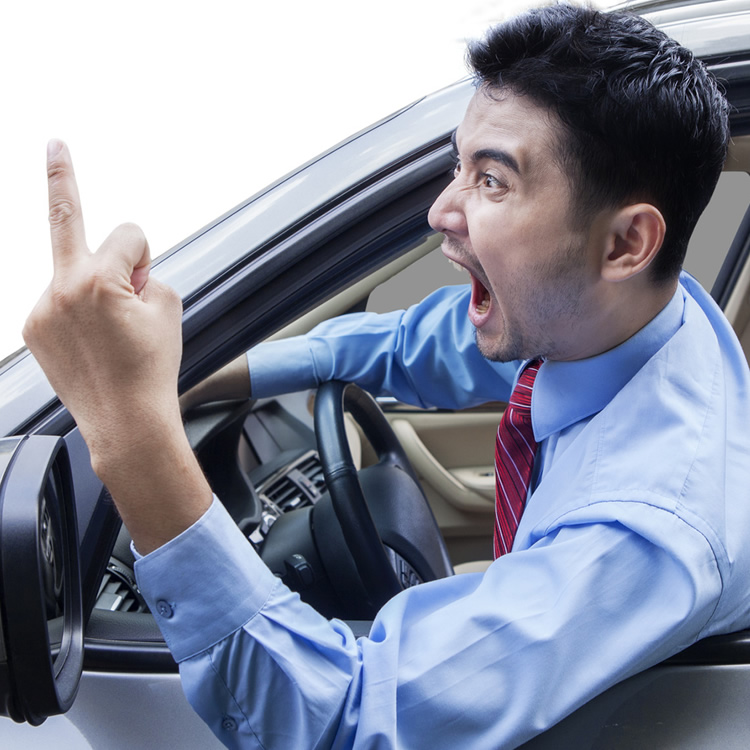 Jim was driving down the road, humming along with the radio, tapping his fingers on the steering wheel. It was a beautiful fall morning, and Jim was feeling great. He planned to swing through Starbucks and grab a coffee, pick up his wife’s dry cleaning, and then pick up his elderly mother to take her to the proctologist to have a Lego removed from her butt. Nothing could ruin Jim’s morning.

As he drove down the busy four-lane roadway, the driver of a Honda CR-V in the lane to Jim’s left, traveling the same direction, ever-so-slightly veered a couple inches towards the center line before correcting the mistake. In a fit, Jim unleashed a furious middle finger and laid on his horn, irate that a fellow motorist could be so negligent as to angle towards him momentarily. “Watch out you crazy motherf*cker!” Jim screamed.

But Jim wasn’t prepared for the awkwardness that would follow. He and the Honda both were forced to stop at a red light and were now right next to each other, where they would remain for two agonizing minutes. In a normal situation, Jim would have just kept on driving and would have completely forgotten about the whole incident in under a minute. But now, he’s been forced to stop and face the other driver.

In this scenario, it’s even worse. Jim notices it’s a trio of frat boys in the car, and everyone is extremely aware of the situation which had just unfolded. Everyone is glaring at Jim. Whereas this was originally their fault, they didn’t appreciate Jim’s wild overreaction and now suddenly Jim is the asshole.

How should Jim spend these next two agonizing minutes? Well, it really depends how he feels.

Jim, like most people, probably wants to avoid any further confrontation and pretend it never happened. In this instance, he should completely ignore the car of men that could easily beat him up and stare straight ahead, oblivious to their stares, taunts, or engine revving. When the light changes to green, Jim should either floor it and get ahead of them or stay back and fall behind them. If possible, Jim could also choose to make a right-hand turn at the light and get the hell out of there even if it takes him off his route. Anything to avoid a little unpleasantness!

If he’s ashamed of his actions and hopes to diffuse the situation and make amends, he could give them a nod of apology without rolling the window down, or actually roll the window down and apologize for his gross overreaction. Hopefully this act will result in the other party apologizing as well. Hey, you guys could wind up being good friends! He could even tell the boys it was a different car he was yelling at. “No, not you fine young chaps… it was that old granny up there in the Cadillac who I was cussing out!” He could also claim “I’m sorry guys, my ex-wife drives that same car, I thought it was her!”

If Jim is still angry at the men and wants them to feel his wrath, he should use this opportunity to exchange words further. Displaying his anger may make the car of boys reconsider any thoughts they had about escalating this incident further. A simple glare or stare-down is also effective and brings shame to the other party, though in this instance, he’s staring down three individuals instead of one. In extreme instances, Jim may even wish to call the police at this point and explain the situation, or even show the boys he’s in possession of a deadly weapon.

If Jim is scared for his life, he could just make sure traffic is clear and go through the red light! He could also choose to get out of his car and run.

Jim could also just play the wild card, and make them forget all about the incident by doing something totally unexpected like smiling and waving at the other car frantically like a lunatic, faking a seizure, screaming along to a Miley Cyrus song on the radio, or ducking down so he’s not visible.

In the end, most people, after engaging in a road rage incident and then being stuck next to their road nemesis that is now in turn angry at their reaction, tend to shy away from the situation and pretend it never happened, though some very upset drivers may choose to engage in the stare-down.

What about you? Do you frequently encounter this type of situation on America’s roadways? How do you handle it?

My Hot Take:
I recently had someone pull right out in front of me on the highway, causing me to hit the brakes and honk. Furthermore, this person never made an effort to speed up, so now I was stuck behind her. I attempted to speed around her, but we both came to a halt at the next stoplight. I’m sure she knew I was glaring angrily into her car, but she never flinched and stared straight ahead and then fell way behind when the light turned green. So it’s not exactly the same as this post, but you get the idea.

tl;dr
If you flip someone off on the roadways and they see you and now you’re stuck next to each other at a stop, you may choose to stare straight ahead and pretend it never happened.