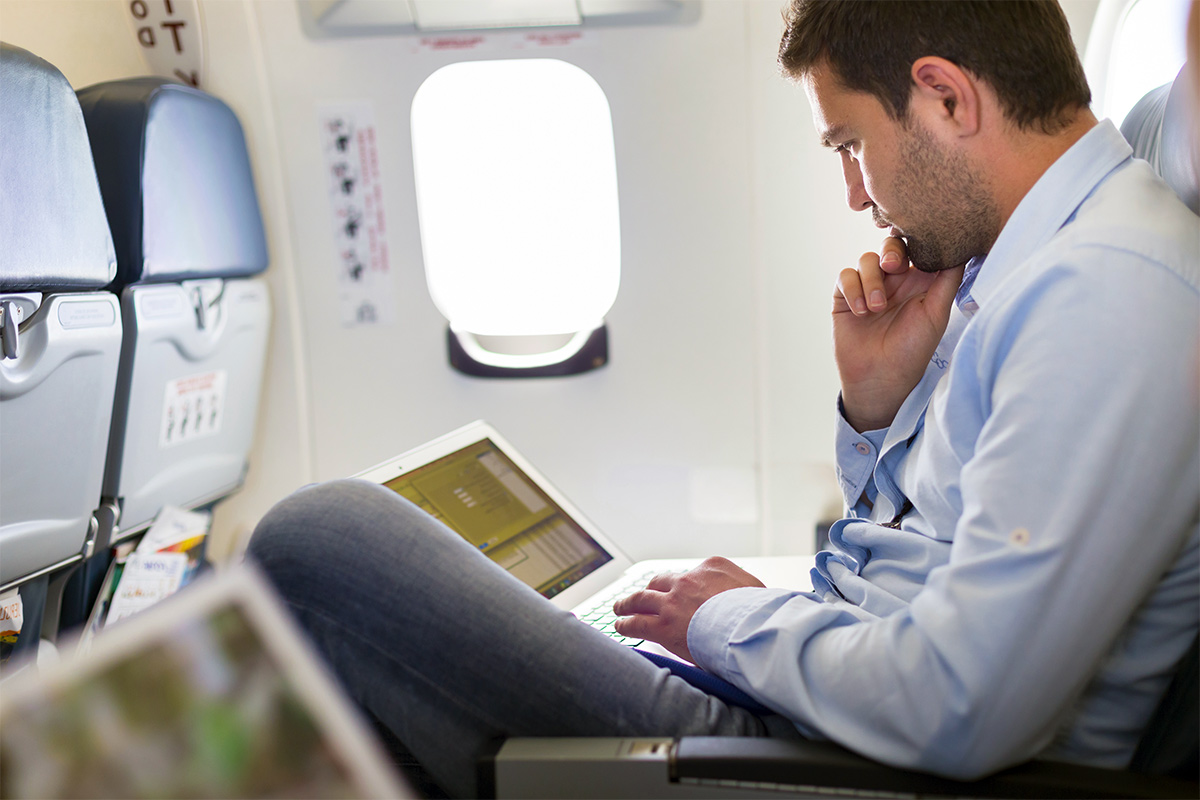 Especially if you’re sitting in a window seat, you’re likely to enjoy your flight more if you don’t feel the urge to get up to use the tiny airplane bathroom.

If you’re on a long overseas flight, intentionally avoiding using the bathroom is probably a bad idea; you really should relieve yourself if needed. But on domestic flights of three hours or less, you can certainly get around having to get up! Not only are airplane bathrooms cramped and oftentimes smelly, but the process of getting out of your seat, trudging down the aisle, and waiting your turn is equally unpleasant. That’s not to mention all the fellow passengers whose eyes are on you. If you’re in the bathroom for two minutes or less, observant passengers can safely assume you only had to go #1. Any longer than that, and they’ll all know what you were really doing.

If you are able to sit in your seat, zone out to a book or movie, and not worry about getting up to use the bathroom, you’ll probably enjoy a happier flight.

One most unpleasant scenario to consider

It was the crack of dawn. Greg was traveling from San Jose to Houston for business. Taking his window seat in row 22, Greg desperately needed these 3 hours, 22 minutes to focus and finish his presentation for the board members. Greg nibbled at a bran muffin and sipped on his Starbucks Venti Dark Roast coffee, the biggest size they had. Having been up since 3:20am, Greg needed all his energy to stay awake and power through his work.

Soon Greg’s row mates arrived. In the middle seat was a larger 67-year-old woman with a cane. She was wearing sweatpants and a Tweety Bird t-shirt. She grunted and moaned as she tried in vain to get her giant carry-on into the overhead bin. Greg was happy to lend a helping hand, then sat back down and took another swig of coffee. “Thank you mister, my name’s June,” the woman announced, collapsing into her middle seat, giving an enormous sigh of relief. She immediately dug through her tote bag for her knitting.

Next to June sat Henry, a 20-year-old man wearing a hoodie with a skateboard brand logo on it. He immediately sat down, put in ear plugs, situated himself with his travel neck pillow, slouched back in his seat, and was quickly off in dream land.

Fine with Greg! He wasn’t planning on getting up anyway. As soon as the plane was in the sky, he popped in his headphones, opened his laptop, and took another drink of coffee, and began pounding away furiously at his keyboard.

An hour into the flight, the beverage cart began its service. When the cart arrived at Greg’s row, he ordered a V8 and pretzels. Just as he was about to refocus, he heard an announcement from the pilot. “Ladies and gentleman, we’re heading into a little bit of turbulence here. I’m gonna go ahead and turn on the seatbelt light. Please remain seated.” No biggie, Greg thought, as he took the last sip of his coffee, pounded his V8, took the last bite of his bran muffin, and returned to his important work.

And that’s when it happened.

Greg heard an audible gurgling noise. He felt an unmistakable churning feeling as he clutched his stomach. Greg tightened his legs. “Oh no. Oh dear God no,” Greg muttered to himself. Greg needed a bathroom and he needed it now. A bead of sweat fell off his forehead as he cried out in agony, “Aaaaggggghhhh.” It really hurt.

Greg glanced over. The beverage cart was blocking his row, servicing the opposite aisle. June had just gotten situated, having put down her seat tray to enjoy her Travelers Snack Pack and hot tea. Henry was out cold, his neck pillow having fallen off and his head nearly dangling in the aisle. The seatbelt sign was on, so Greg wasn’t supposed to get up anyway. Ignoring the sign was a teenager, waiting impatiently for her turn in the bathroom at the back of the plane. And then came that turbulence the pilot had warned about as the plane sailed over the Rocky Mountains. Bam! Everyone jolted in their seats and the plane rocked. June yelped as the hot tea sloshed onto her leg.

Short of barreling over June, Henry, a beverage cart, sprinting down the aisle, butting in line, and tearing someone out of the bathroom, Greg was going to have to do everything in his power to hold his poop from exploding out of his pants. For a moment it would settle and Greg felt okay, but seconds later his bowels would start clenching again and he agonizingly repositioned himself to keep it from bursting out, each time letting out a whimper.

Ten brutal minutes passed, though to Greg it felt like an eternity. With every bump of the plane, Greg’s body revolted against itself. His hair was soaked with sweat. He loosened his tie and unbuttoned his shirt. He had no choice but to push the button to alert a flight attendant.

When the attendant arrived, she could see Greg was unwell. “Oh my, are you feeling well?” she asked. “I need to use the restroom,” Greg wailed as he winced, holding back yet another massive bodily effort to pass the coffee and bran-induced diarrhea. “Sir, the captain has the seatbelt light turned on. There is a bag in your seat back if you feel sick.”

“No, it’s not that,” Greg cried as he wiped the sweat from his forehead. “It’s going to come shooting out the other end if we hit another—”

Bump! The plane jerked to the right. The attendant braced herself on Henry’s seat. June slammed into Greg, sloshing more tea onto her lap. Greg knew it right away, and he could not believe what just happened. The 42-year-old businessman, the Stanford graduate, the director at a Fortune-500 company, the doting father of two, dressed in the very suit he was planning to wear to the presentation in four short hours, had just pooped his pants. This was the lowest moment of his entire life.

To wrap up the story, Greg had to sit in his poopy pants for a while longer, then when he was finally able to go to the bathroom, he had to figure out a way to wash up and clean his pants using the tiny bathroom sink, all while soaked head to toe. Once the plane landed and he got off, he had to use an airport bathroom to clean up even further, then try to find new pants at an airport shop. And he really hadn’t allowed himself much extra time to rent his car and navigate through heavy Houston traffic to get to the office and set up.

In other words, don’t be Greg.

How to avoid needing to use the restroom on a plane

It’s pretty simple, really. There aren’t very many items to even consider to keep one’s self from needing to go Number 2 for a few hours.

Thankfully I’ve never been in this position, but I have had to pee really bad on a plane several times under the same basic scenario as Greg. At least in that instance, your options are a little more open. A man could conceivably relieve himself in his seat, hiding his lap and using a can or bottle of some sort, in times of dire emergency… I haven’t, but it could be done. I’ve raced off a plane ahead of my wife and pushed people out of the way to get to a bathroom, once in Jamaica and once flying back into Austin.