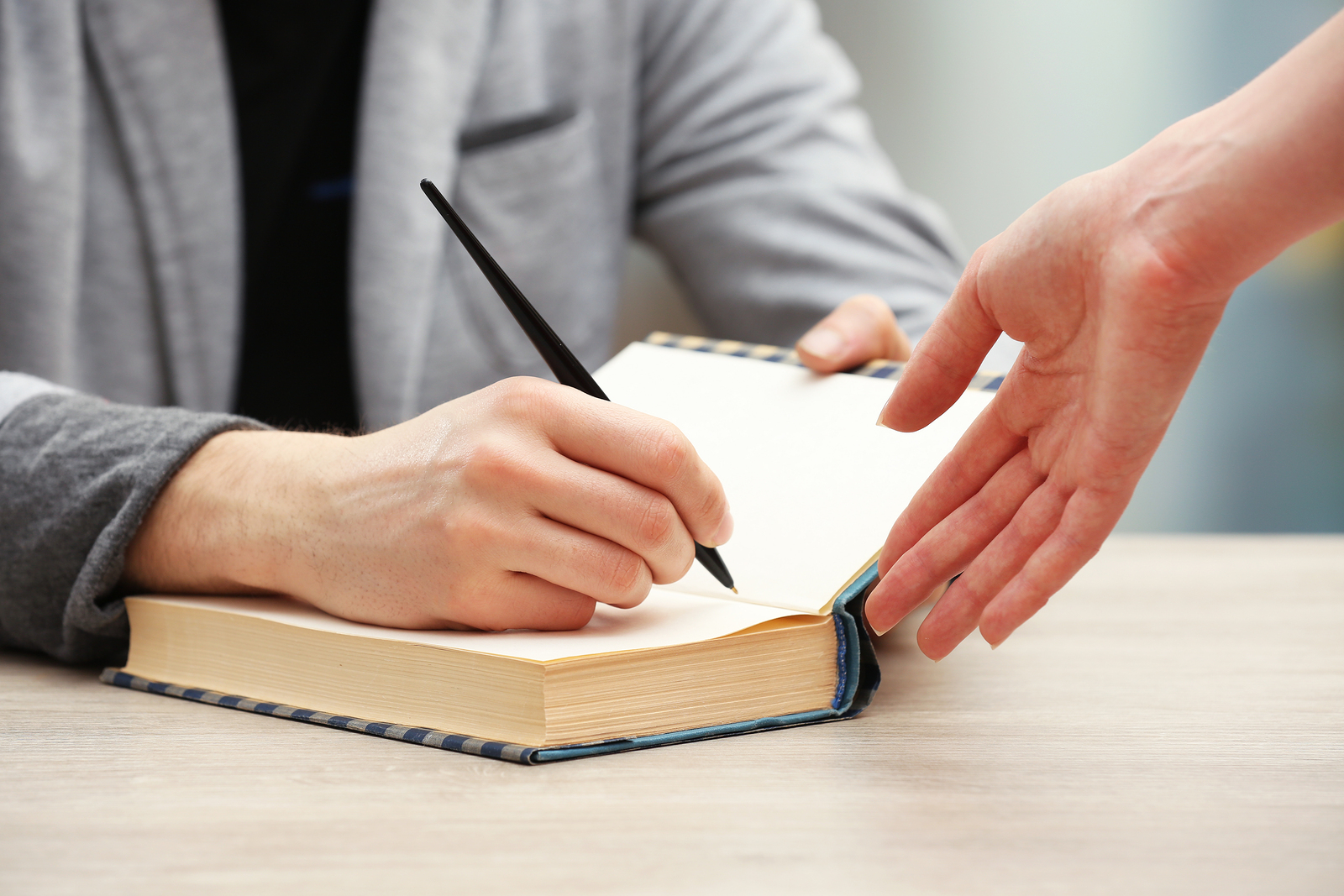 Authors of newly released publications are frequently asked by bookstores to appear in-store for a book signing. But what if no one shows up?

We’ve all been there. You’ve spent years perfecting your book, shopping it to publishers, and waiting for that first copy to sell. Now that you’re a bona fide success, book store owners may want to exploit your celebrity status to attract shoppers to their store to drum up business. Your initial reaction is pure jubilation—more people are going to purchase your book and wait in a long line for you to autograph it!

But… what if they don’t? What if no one comes to your book signing, and you’re left sitting at a table alone in a bookstore, the butt of people’s jokes? “Hey, mom, who’s that fat nobody sitting there at a table with that pen looking so sad?” “Oh, don’t worry son, that’s just some has-been author no one’s ever heard of. I almost pity the poor man.”

George’s new book was a hit; his book-signing event was not.

George had worked tirelessly on his novel Clutched in the Arms of an Ape for years, and now that the book had been published and sales were starting to roll in, the good folks at Barnaby Books called George and made a request to come in for his first ever book signing! Without hesitation, George agreed.

The big day had arrived, and George arrived twenty minutes early to scope out the scene. He didn’t want to be one of those rude authors who makes his fans wait in line for an hour for him to show up. He was greeted by Liza Patterson, the general manager. “Thank you so much for coming in, George,” Liza said, somewhat starstruck. “I just loved the book. And the part at the end where the ape’s mother was really a chimp?! I literally did a spit-take! Talk about a twist!” George was led to a fairly ordinary card table with a blue drape. On it were two bottles of water and a pair of Sharpies. Nearby was a large cardboard poster featuring the cover of his book and a self-portrait of George.

“Where are the people?” George asked. “I figured there would be at least a few lined up early!” Liza laughed, and assured George people would arrive soon, and asked him to get situated. He plugged in his iPhone to a nearby outlet and took a seat. He looked around the store—nary a shopper to be seen. It was only two minutes before the signing was scheduled to start. This was not a good sign.

Hands in pockets, George strutted around the store, thumbing through a few books. He checked his phone: 3:12. A young employee stocking a nearby shelf made eye contact. “Ma’am? This was supposed to start at 3, right?” George asked. The woman clearly had no idea who he was or what he was talking about. “Umm, my book signing? I’m George Dick, the writer of the Ape book?” The young lady went to check for George but forgot to return and was later seen canoodling with a male customer.

Soon, shoppers started to file in the store. George anxiously took his seat, cleared his throat, took a drink of water, and broke out his Sharpie. But still, no one stopped! Not wanting to look pathetic, George pretended to take a phone call. A few people from a distance looked over in George’s direction. One man stopped to read the poster. A pair of high school girls asked George if he was famous. He immediately regretted replying “Depends… you single?” Others were seen sneaking photos of George, giggling. George imagined he was going viral for his awful showing.

Throughout the rest of the event, George was spotted assisting other customers, cleaning out his wallet, following the Twins-Pirates game on his phone, and polishing his glasses. Eventually, Liza returned to the table. “I’m so sorry, George. Normally we have much larger crowds. I imagine it’s just the timing, what with… Arbor Day and all. You understand.”

How can you pretend to look busy at your own flop of a book signing event?

Your book signing probably won’t be sparsely attended. Book stores tend not to book authors that they don’t believe will draw a crowd—it reflects poorly on them, too. But if it is poorly attended, there is probably a rational reason for it, such as the weather or a nearby accident blocking traffic. Keep your chin up and never give up!

For God-only-knows what reason, I staged a fake book signing in college in 2003 for a photo shoot. This was the result.